I usually take a pass on “deal day”, and I still might. That said, this one has my interest. You’ve heard the name all week, some of you are probably wondering what exactly Snowflake (SNOW) is. A provider of cloud based, manageable, and engineerable data storage, allowing clients to not just warehouse, but analyze and customize the information known as “big data.”

I am not going to tell you that I fully understand the scalability, or the variable pricing, but according to the experts, this is break-thru type stuff in the field. Snowflake uses standard SQL formatting, which I believe is more like Oracle (ORCL) , and unlike competitor MongoDB (MDB) . Already, Snowflake competes in this data warehousing space with some of the cloud’s largest players, that in turn, offer such solutions of their own. According to HG Insights (which is cited at MarketWatch), based only on the number of clients, Snowflake’s business is already about one quarter the size of Amazon’s (AMZN) Redshift, and about half the size of Alphabet’s (GOOGL) Big Query.

Numbers like this, and the uniqueness of the company are not exactly what caught my attention. I had been involved with, and even run the execution end of quite a few IPOs in my day, though my investment banking days are indeed getting smaller and smaller in the rear view mirror all the time. What grabbed my attention was the support this firm enjoys. Snowflake enjoys triple digit revenue growth, but also rapidly growing net losses. Wall Street, as well as the investment community at large, does not value growth style tech type names through a historically fundamental lense though. We already know that. Just last week the firm revealed through a legal filing that both Warren Buffett’s Berkshire Hathaway (BRK.A) , (BRK.B) , and Marc Benioff’s Salesforce (CRM) had agreed to purchase $250 million worth of stock at the IPO price in what would be a private placement. In addition, Berkshire Hathaway had also agreed to buy more than 4 million shares in what would be a secondary transaction, directly from former Snowflake CEO Bob Muglia.

With names like that interested in “buying their way in”, it’s no wonder that public interest is growing. On Tuesday night, the firm priced 28 million shares at $120 a piece. Another 4.8 million shares have been set aside for options meant for the underwriters. Think of that. Think of the value investing nature of Warren Buffett, yet here he is. The range for this pricing had just been lifted during the day from $75-$85 up to $100- 110. Poof! $120 it is. Suddenly we are talking about a money losing upstart debuting at a market cap of more than $33 billion. Think Warren Buffett is washed up? Maybe you haven’t been around the block enough times. Marc Benioff? Don’t want to take an IQ test sitting next to that guy. These guys aren’t fools. Will I buy some today? Probably not if the shares open well above the IPO price. Maybe if they dip. The only money I am running is my own, so there is no net shall I fall.

SNOW will open at some point Wednesday at the New York Stock Exchange. The book is apparently being run by Goldman Sachs and Morgan Stanley. What does that mean to me, as an interested party? You most likely have time to refill that cup of coffee and grab something to eat as the opening bell rings aloud. I expect these guys to take their time getting that first trade on the tape.

Haves And Have Nots

What can one say about a day such as Tuesday? Generally positive if you’re like me. I mean sure, everyone thinks of me as an old NYSE floor trader, but the truth is that I have, due to the realities of the times, been more heavily exposed (at least personally) to names that reside up at Times Square for a number of years now. On Tuesday, eight of the S&P 500’s 11 sectors closed in the green. Across the realm of averages and indices, the Nasdaq 100, and Nasdaq Composite lit the path followed by the S&P 500. As for the blue chips, mid-caps, and small-caps, market movement was pedestrian at best.

The Dow Industrials, S&P 400 & 600, and Russell 2000 all closed very close to unchanged. The Transports, however, did have a nice day. Given the 9% move higher by FedEx (FDX) overnight, I would think this index may pop nicely upon the ringing of Wednesday’s opening bell. Perhaps something to do, while waiting on what passes for this generation of investment bankers to get their collective acts together.

What I liked best about Tuesday, was the second consecutive broad move higher for the large cap Nasdaq indices. As one might guess, the market’s strength on Tuesday was largely drawn from the worlds of internet communications, software, and semiconductors. Apple (AAPL) did not see a lasting bounce off of it’s “Time Flies” event, thus hardware stalled. Breadth was generally a positive uptown. Winners beat losers. Trading volume increased over Monday, and advancing volume more than doubled declining volume.

Down at 11 Wall, the story was mixed. Winners did beat losers, and trading volume did increase over Monday, but what does that mean when declining volume tops advancing volume? I can’t really paint that door green nor red. The problem children were, as always in the Energy sector (despite support for WTI Crude in dollar terms), and in the banks. Yes, the banks were taken out to the woodshed. Citigroup (C) surrendered another 6.9% on top of Monday’s 5.6% decline, closing at the lows of the daily range for both days. On top of that, JP Morgan (JPM) gave up 3.1% on Tuesday, closing a whisker above its own 50 day SMA, as CFO Jennifer Piepszak shaved about $1 billion from the firm’s estimates for full year 2020 guidance for net interest income. Then rumors hit the street (not to mention the papers) that an employee working in equities trading had tested positive for Covid-19, as the firm’s interest in getting employees back into “the office” has been well publicized.

Who Cut The Cheese?

Kraft Heinz (KHC) , that’s who. From Tuesday’s virtual investor event, Kraft Heinz announced that the firm had entered into a definitive agreement to sell a number of cheese related businesses to France’s Groupe Lactalis for $3.2 billion. Brand names included in this sale would be Cracker Barrel, Breakstone’s, Knduson, as well as Polly-O, Hoffman’s and Athenos in the U.S. only, and Cheez Whiz outside of North America. The firm states that the proceeds will be used to shore up the balance sheet, which makes sense given its $26 billion debt-load.

You may recall that Kraft Heinz was part of my original pantry play, and the firm has seen a surge in sales since the start of the pandemic. That said, earnings were still negative for the most recent quarter once adjustments are backed out. The shares are down more than 10% since mid-August, but our position is still up 16% from initiation. I have shaved a few shares over the summer, and I would think that I probably exit at least half of what’s left soon enough. The best reason to stick around is the 5% dividend yield. This stock is indeed a pandemic play, but not necessarily a value play. I consider the position a luxury at this point. Kraft may have cut the cheese. Sarge may just cut the Kraft.

Readers know what that means. Probably light volume until the official policy statement is published at 14:00 ET, or maybe until Fed Chair Jerome Powell takes the virtual podium at 14:30 ET. What to expect? While there will almost certainly be adjustments made to the committee’s quarterly economic projections (basically because the economy in general and labor markets more specifically are outperforming prior expectations), that will probably not be the focus. Wall Street and Main Street both know that the economy is well ahead of where we thought it would now be, when these projections were made three months ago.

The FOMC, and Powell himself, will have to address the central bank’s plan to target average consumer level inflation over time, allowing for overshoot in order to make up for lost time. We know that this shifts impetus for changes made to short-term interest rates from self-defense to something more flexible allowing for labor markets and economic growth to build a base that could launch some momentum before pulling the rug out from underneath. We get the intent. What we need to hear is the nuts and bolts. How to implement such a strategy. You likely will not get that in the statement. You may get a morsel in the press conference.

Beyond that, and probably not today, we will need to hear longer-term strategies for the central bank’s asset purchase programs. This is where the forward guidance is needed. We know that the Fed will have to finance the federal government for a long time coming. How they go about this will result at some level in yield curve control, labeled as such or not. This will be key, and I don’t know if we’ll know much on this front prior to the election.

An impressive quarter for Adobe (ADBE) . No other way to put it. Beats on both the top and bottom lines. Adjusted or not. A beat for adjusted operating income. Record cash flow from operations. Digital Media ARR (annual recurring revenue) growing at a 24% annual clip. Wall Street likes it. Since Tuesday evening, at least three five star rated sell-side analysts have reiterated “buy’ ratings. All three now have price targets of either $550 (two of them), or $600 (one). 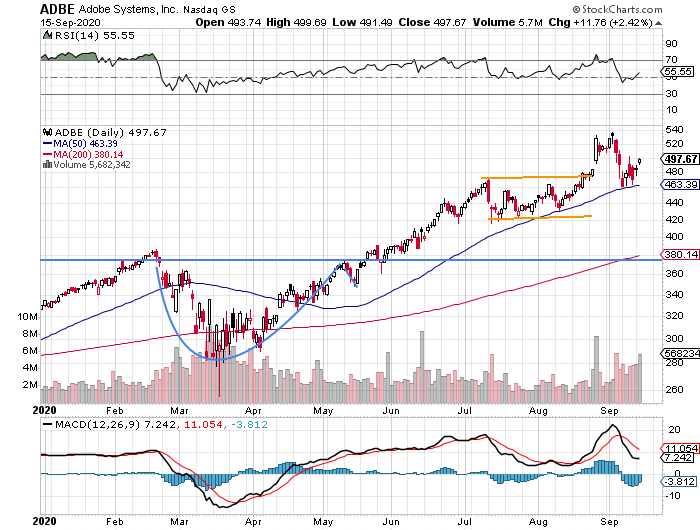 Readers may recall the story that I wrote just a couple of days ago. I had accidentally gotten myself flat ADBE due to having a medical procedure done, and laying out some bids and offers in various stocks as I left my desk. Well, two things matter here, now. One, I had to buy the shares back, and that trade is up 7% already. Two… the firm’s outlook for the current quarter is outstanding for anyone not named Adobe. The firm projects EPS of $2.64, which would land precisely upon consensus. The firm also guides revenues to $3.35 billion, which is just a smidge below the street. Is the firm being conservative? Probably. Does my price target of $580 still pass muster? I don’t think so. In fact, if I see the shares trade above $535 on Wednesday, I probably ring the register. Just sayin’. Still love the firm. Will love the stock again.

The Fed (All Times Eastern)