Right off the bat, I wish Ocugen (NASDAQ:OCGN) the very best. Irrespective of whatever I feel about OCGN stock, the underlying biotechnology firm is on the cutting edge of advanced scientific research. Specifically, Ocugen’s end game is to develop gene therapies to cure diseases that lead to blindness. 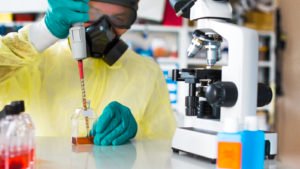 Instinctively, this mission statement piques curious investors’ interest. I suspect that I’m not dissimilar to you when I say this: our most valuable sense is vision. Although not ideal, we can effectively work around losing our other four senses. But the gift and blessing of sight is something that we shouldn’t take for granted.

More importantly for OCGN stock, Ocugen has a rational basis for its pursuit of rare and underserved blindness diseases. According to RD-360.com:

An overwhelming majority of rare diseases are the result of a single-gene defect, making them a potential target in the hunt for treatment. The U.S. Food and Drug Administration (FDA) has approved just 4 gene therapies to date, but with more than 900 investigational new drug applications for ongoing clinical studies related to gene therapies in the works,1[sic] the time for these therapeutics to take center stage is fast approaching.

Thus, if you’ll excuse my J.R.R. Tolkien reference, Ocugen is seeking the one ring to rule them all. However, this is also one of the main headwinds against OCGN stock. The lucrativeness of finding this gateway is initially compelling to draw significant competition.

At the same time, RD-360.com writes that the space is hindered by “extremely small patient populations, a lack of referrals, and questions regarding cost and funding.” Therefore, I don’t find it too surprising that Ocugen stock has struggled until just recently.

The Potential of the Science and OCGN Stock

According to Ocugen’s website, the biotech has three therapies in its pipeline:

Currently, these therapies are all in pre-clinical studies. Logically, this leaves several phases for any one of these drugs (or all of them) to fail. Further, the success rate of receiving an FDA approval doesn’t exactly favor biotech contrarians. Based on research from the MIT Sloan School of Management, nearly 14% of all drugs in clinical trials receive such approval. Further, the institution writes:

Approval rates ranged from a high of 33.4 percent in vaccines for infectious diseases to 3.4 percent for investigational cancer treatments. Previous estimates placed overall success rates, from Phase I through to FDA approval, between 9 and 11 percent.

Despite these barriers, OCGN stock has enjoyed a sudden burst of momentum. A few days ago, shares almost hit $1 on an intra-day basis. Starting the month of July, OCGN was trading hands at 22 cents.

What could cause such a sentiment shift in what has been a losing bet up till now? With little in the way of substantive information and analysis, it’s likely we’re seeing a rush of enthusiastic investors.

In fact, data from Goldman Sachs and compiled by the Wall Street Journal reveals an explosion of new user positions on the popular Robinhood trading app. True, tech firms like Apple (NASDAQ:AAPL) and Amazon (NASDAQ:AMZN) have benefited the most from the influx. But many have undoubtedly found names like OCGN stock and bid them up.

If you think about it, it makes perfect sense. With the stay-at-home orders and “free” money from the government, what else are you going to do?

A Potent Combo and Not Necessarily in a Good Way

While financial advisors often suggest those starting in their careers to get a head start by investing early, buying names like OCGN stock is not investing. As Amy Lynch, founder and president of FrontLine Compliance argues, this is day trading, which is equivalent to gambling. In an email to me, Lynch wrote:

Day trading is actually very costly to an investor over time and risky in that timing the markets is often a losing game. Day traders typically have a gamer’s or gambler’s mentality. The link to gaming is one reason why Robinhood has been so well received by younger people since it was built on a gaming style platform. Regulators and others in the industry have criticized it for the same reason.

Lynch makes an excellent point. You’ll notice that video game usage spiked during the onset of the pandemic. Apparently, people cannot get enough of their digital fix. But for many folks, the gaming high is not enough, and Robinhood provides a more pleasurable but ultimately riskier alternative.

Don’t get me wrong – I think Robinhood is a fine innovation. As well, people can do whatever they want with their money. All I’m saying is that you shouldn’t confuse a rising OCGN stock price with a viable business. The two are not the same but this message may be getting lost in our new normal.

A former senior business analyst for Sony Electronics, Josh Enomoto has helped broker major contracts with Fortune Global 500 companies. Over the past several years, he has delivered unique, critical insights for the investment markets, as well as various other industries including legal, construction management, and healthcare. As of this writing, he did not hold a position in any of the aforementioned securities.