Results are based on our typical flatback 450kg feeder steer, going on feed today and closing-out after 105 days on feed on 6 January (see our standard set of variables at base of page).

The business of feeding and marketing grainfed cattle is complex enough at the best of times, but the recent COVID-19 environment is bringing a suite of new challenges to bear that stakeholders have not previously contemplated. That’s reflected in some substantial changes in variables since our previous report.

For today’s budget, we have allocated a feeder steer purchase price of 385c/kg, a 15pc rise from our previous budget this time in July. That’s a new record high in our trading budget series dating back to Beef Central’s launch in May 2011, as can be seen in the blue line in the graph published here. The previous high was 375c, last reached in June and March this year.

The underlying cause is the sheer shortage of heavy feeders, and young cattle generally this year, after two years of extensive drought across eastern Australia. The better feeders were +400c/kg at Roma store sale on Tuesday, while black steers are as high as 435-450c/kg in public grids, and perhaps higher in private deals for cattle of known performance.

A 385c/kg feeder steer this week values our steer at a whopping $1732, another $67 higher than our previous report.

Current representative ration prices in downs feedlots is around $390/t, down from $400/t quoted in our previous budget eight weeks ago. Current ration prices are continuing to come under pressure, however, with 100-day cattle going on feed today and closing-out in early January being exposed to new-season grain.

But until the NSW harvest starts, it’s still hard to tell where that feedgrain price might go. Indeed the grain market has actually risen recently, principally because of a few shorts in the market.

While lotfeeders will be sweating on some more price relief in feedgrain in coming months, it’s worth remembering that we were still quoting finished ration prices at $480/t as recently as February this year, and $475/t in May.

Today’s ration price is in fact the lowest seen since April, 2018. At its low-point around Christmas 2016/17 ration quotes slipped to around $300/t.

For that to happen in coming months, however, it will require a softening in value other ration ingredients, reflected in a big cotton crop and a substantial silage season. Current silage stockpiles in some feedlots remain very low, and a lot of lotfeeders still have ‘expensive’ silage on hand, which still has to be worked-through.

Today’s ration price at $390/t delivers a total production cost (feeder price plus feeding cost) of $2457, a rise of $53 on our July budget. Despite today’s record feeder price, that’s not as high as it was earlier, when rations were worth $70-$90/t more.

Cost of gain continues to improve with the decline in ration prices, as can be seen in the graph at the top of this page. The figure today is calculated at 291c/kg, down another 8c/kg since our previous budget, and 60c/kg lower than May.

It’s the first time the cost of gain has crept below 300c/kg since May 2018 (see graph), and the trend is being seen in lighter cattle again coming into favour in some feedlots’ 100-day programs.

While the trend is apparently not yet widespread, feeding lighter cattle out to say, 135-150 days to achieve the same carcase weight end-point also helps with feedlot occupancy.

There is now clear evidence of feedyards in Queensland and NSW emptying out, with one very large multi-site feeder recently suggesting to Beef Central that his company’s yards were currently only 60pc full.

While there is a considerable lag-factor in reporting, the quarterly industry feedlot survey for the June quarter, published in early August, showed a 7pc fall in numbers, reach a low not seen since December 2018. September quarter figures will likely show a further substantial decline, lotfeeders are telling Beef Central.

The easing in COG is making lighter cattle a little more attractive again, but unlike the trend back in 2016-17 when light feeders were highly attractive due to low cost of gain (see graph) and ration prices around $280/t, this time lotfeeders are facing extreme competitive pressure from restockers for the same light store cattle. Sub-300kg cattle at Roma sale in recent weeks were trading in the low-mid 400c/kg range – perhaps not as lofty as some of the +450c prices seen earlier – but looking a little more attractive, and some yards are now inducting some lighter cattle around 350-370kg for 100-day programs as a result.

All that leaves today’s breakeven figure on our standard beast today at 697c/kg, up 16c from our previous July budget. For better-performing cattle producing average daily gains of 2.2kg, instead of our standard 2kg/day, the breakeven falls to 675c/kg.

Forward contract prices on 100-day ox offered by competitive Queensland processors have continued to soften recently, due mostly to flat international demand and strong competitive pressure from an abundant supply of sharply-priced US grainfed beef, boosted by currency movements.

For today’s budget we have quoted 650c/kg for forward contract cattle exiting the feedlot early January, down 20c/kg since our previous July budget, and a recent record high of 680c/kg in June.

Given our breakeven figure of 697c/kg calculated above, today’s forward contract bullock slaughter price represents a loss of $164 on our standard steer gaining at 2kg/day, a massive $124/head decline on our July budget, when the loss was forecast at $40. The result on a higher performance animal gaining at 2.2kg/day, instead of our standard gain of 2kg/day, is a loss of $91.

We have recorded a long sequence of losses in our 100-day trading budget over the past two or three years, and readers sometimes comment, asking why lotfeeders would continue to feed cattle at a loss. Readers are reminded that the regular trading budget calculation should not be interpreted as reflection of the ‘overall viability’ of the lotfeeding sector – it is simply an exercise designed to gauge the viability of a beef producer buying feeder steers, sending them to a custom feedyard, and then selling the finished cattle at the expected forward grid price at an abattoir. The opportunity cost of the exercise is sometimes missed by producers.

Published below is a graph plotting average returns to US cattle feeders over exactly the same time cycle as Beef Central’s reports (2011-2020). While the cattle, grain price, seasonal and beef demand cycles in the US are often different than those in the Australian grainfed industry, what can clearly be seen is that there are lengthy periods of loss-making – at times out to as much as US$500/steer back in 2016 – much as there has been in Australia. Source: Steiner Consulting. 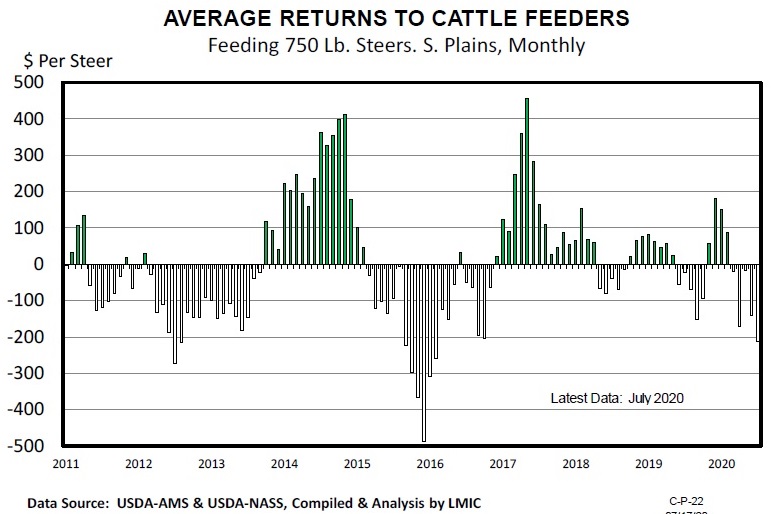 Beef Central’s regular 100-day grainfed trading budget scenario is based on a standard set of representative production variables, ex Darling Downs. The trading budget summary is built on a feeder steer 450kg liveweight, fed 105 days; 356kg dressed weight at slaughter; ADG of 2kg; consumption 15kg/day and a NFE ratio of 7.5:1 (as fed); $25 freight; typical implant program. Bank interest is included. It is important to note that variations exist across production models (feed conversion, daily gain, mortality, morbidity, carcase specification); from feedlot to feedlot; and between mobs of cattle. Equally, there can be considerable variation at any given time in ration costs charged by different custom-feed service feedlots. Click here to view an earlier article on this topic. For a more specific performance assessment on a given mob of cattle, contact your preferred custom feeder.