The technical glitch may frustrate Japan’s efforts to boost its appeal at a time when China’s tightening grip on Hong Kong is sparking international concerns about the territory’s status as an Asian financial center.

“If doubts are raised about the stability and safety (of the stock exchange), this will also damage its trustworthiness as an international financial base,” said Hiroshi Watanabe, a senior economist at Sony Financial Holdings Inc.

With 2.9 trillion yen ($27.5 billion) worth of trade a day, the Tokyo Stock Exchange is the world’s third largest with about 3,700 listed firms. Foreign investors are a big presence, now accounting for about 70 percent of trading value.

“A stock exchange without trading is nonsense,” said Makoto Sengoku, a market analyst at the Tokai Tokyo Research Institute. 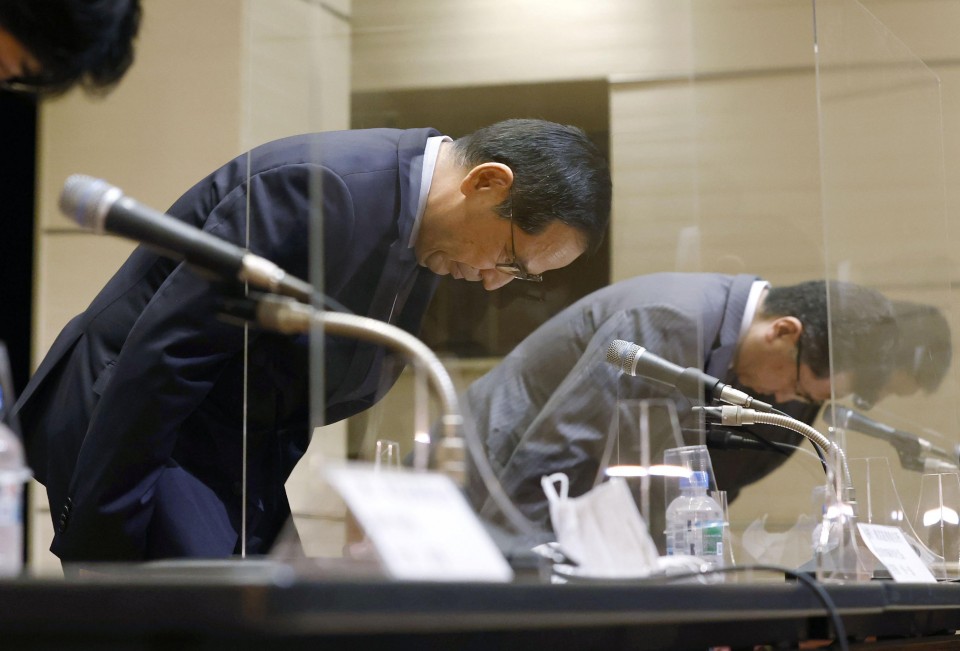 Koichiro Miyahara (L), president and CEO of the Tokyo Stock Exchange, bows in apology at a press conference in Tokyo on Oct. 1, 2020, after a system glitch caused a suspension of the day’s trading. (Kyodo)

Thursday’s malfunction stemmed from a defect in hardware in the bourse’s trading system, exposing the vulnerability of critical infrastructure. It is not the first time that the stock exchange has been hit by glitches.

The event presents a challenge for Suga, who took office last month reassuring investors by pledging to continue with his predecessor’s market-friendly “Abenomics” economic policy program. The 71-year old has also put digitalization at the forefront of his administration’s policy agenda.

An apologetic TSE President Koichiro Miyahara acknowledged Thursday that the bourse did not have proper systems in place, saying that it had failed to keep up with “the greater trend in society toward digitalization.”

Some in the brokerage industry have already voiced concern that the TSE’s damaged image will prompt foreign firms to look elsewhere in Asia, not Japan, for listing.

With New York and London dominating the top two spots, Tokyo ranks fourth after Shanghai in the global financial centers index released by a British think tank. Hong Kong and Singapore come in fifth and sixth.

The trade suspension, which also hit other stock exchanges in Sapporo, Nagoya, and Fukuoka, is a fresh reminder that the road to becoming a trusted financial hub will not be easy.

While the Tokyo bourse is expected to get to the bottom of the issue to prevent a recurrence, market players could start questioning whether the planned reorganization in 2022 of four trading sections into three will go without a hitch.

And Japan’s challenge to grow into Asia’s financial center does not end with fixing the technical glitch.

“Encouraging foreign firms to get listed in Tokyo is the most viable strategy for it to become a hub in Asia,” said Minoru Nogimori, a senior economist at the Japan Research Institute.

“But there is also the more underlying issue of whether Japan is an appealing place after all.”

Regulators to order Tokyo bourse to report on worst-ever glitch