During times of uncertainty, it’s not hard to see the appeal of day trading. Months from now the markets will likely prove that some stocks were undervalued while others were worth a fraction of their selling price. Considering that, thanks to such apps as the uber-popular, commission free Robinhood, stocks are just a tap and a swipe away, more and more people are trying their luck. The right investor with the right strategy can make a killing. They can also lose badly.

For any number of reasons, more young people are pushing aside the “buy and hold” mentality and diving into the world of stock-picking. Brokerage houses like Schwab, Etrade and Robinhood have seen a spike in new accounts — as much as 170 percent in the first quarter — with a disproportionate share coming from younger wealth-seekers. This shouldn’t come as a surprise. But those new to the day-trading game need to keep some pointers in mind.

So, what are some guardrails you might want to put up before throwing your money on the giant roulette table known as Wall Street? We connected with two fee-based financial advisors about what those new to day trading on Robinhood and other such apps can do to improve their odds of success and make sure they don’t upend their long-term financial health.

Whether using Robinhood, E-trade, or another platform, betting on individual securities is always a risky proposition. This means it should be something you only want to do with non-essential money, stresses Aaron Agte, the founder of Graystone Advisor in Foster City, California. Before building up a brokerage account, he advises going through a checklist.

Thanks for the feedback!

Are you putting between 12 and 15 percent of your salary into retirement? Are you funding your long-term needs, like the down payment on a house or your child’s college account? Are you putting two to five percent aside for a cash reserve or rainy day fund? If you can answer “yes” to all those, you can think about putting some “extra” dollars into play.

2. Only Bet as Much As You’re Willing to Lose

Day-traders tend to be an optimistic bunch, but beating the broader market’s overall performance isn’t all that easy. The more money you invest in unproven companies like tech start-ups, the easier it is to take a bath on your investment. “Only bet as much as you’re willing to lose,” says Kevin Smith, a managing partner with Austin Wealth Management. And, this should go without saying, but in order to avoid any uncomfortable conversations later on, Smith also recommends talking it over with your spouse about how much you’re putting on the line.

3. Understand That Losing Is Very Likely

A lot of investors see stock-picking as something akin to playing the lottery — if they get lucky and hit on the next Facebook or Netflix, great. But, really, it’s should be about having fun. If you’re opening an account with few expectations, don’t beat yourself up if things go south.

Because that’s very likely possibility. A 2010 study by Brad Barber at the University of California-Davis found that, factoring in transaction costs, only 1 percent (yes, one percent) of day-traders generated strong gains on a consistent basis. “Enjoy the winners and don’t sweat the losers,” says Smith.

While more well-heeled investors might be able to select stocks without risking their retirement, Agte isn’t keen on taking short-term positions on individual stocks. In part, that’s because any gains from shares held less than a year are subject to short-term capital gains rates. That means you’ll pay your marginal income tax rate on stocks you only owned for a few weeks or months.

It’s also a fool’s errand looking for companies that will make a sudden climb—or fall, if you’re shorting stocks. “There’s so much randomness over a short-term timeframe,” says Agte. Holding onto stocks for a longer period, he adds, gives you a better perspective on how the company is doing relative to its peers and the economy as a whole.

5. Create a System and Stick to It

If your goals are a bit loftier — that is, you’re trying to invest as a business endeavor and build long-term wealth — be ready to make a commitment. “This is going to take a lot of time, so consider if you should spend that time on your highest-value talents in some other realm,” says Smith.

You also need a game plan. Otherwise you’re likely to make an emotional response to market developments, which is rarely good. Smith gives the example of an investor who makes a rule from the outset not to allocate more than 10 percent of his overall assets to a single stock. If a particular company jumps in value, he’ll sell some shares and lock in those gains, rather than holding on too long.

When trying to determine if their strategy is successful, Agte cautions that you really need to consider the opportunity cost. It’s not whether your account’s value went up or down, but whether you would have been better off buying a broader fund like the Vanguard Total Stock Market ETF. “It’s more than just gambling with a positive expected value,” says Agte.

7. Know When to Cut Your Losses

Financial markets are funny things. The same approach that might be a winner during period might end up with ugly results later on — and vice versa. Having an exit plan is crucial. “Decide in advance how long you’re willing to underperform before changing your strategy,” says Smith.

8. Be Smart with your Winnings.

Perhaps you’re getting lucky and opening up your account statement is enough to put a huge grin on your face. Avoid the temptation to take that dough and buy a sports car or put a new swimming pool in the backyard. Capital gains tax is real. And, besides, just because you earned a good deal of cash doesn’t mean you should spend it on frivolities. Smith suggests diverting those gains into a more responsible, and decidedly less sexy, strategy like a broad market index. “You will not want to do this, but do it anyway,” says Smith.

Investment firms hire experts to sift through boat-loads of company and industry data on a full-time basis in the hopes of finding a diamond in the rough. That puts them at a distinct advantage over an at-home investor. “You can’t apply the same strategy as a money manager, with a fraction of their time, and expect to outperform them,” notes Agte.

Rather than trying to beat the pros at their game, Agte recommends leaning on your personal experience with a given brand. Do you enjoy the product or service so much they bring it up with friends unsolicited? Can you see thousands or millions of people choosing to spend their money on a particular product or service? Chances are, you’re not alone in that view, so the company very well could have a bright future ahead. 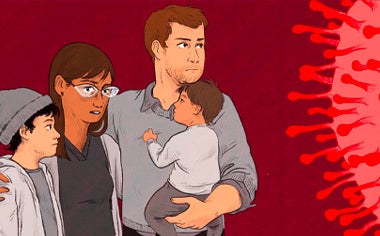