Retail punters have been trading shares in record numbers. Thanks to the stock market jumping up and down like a kangaroo, and thanks – reportedly – to sports gambling being unavailable, households are throwing a record amount of cash at the market.

That retail investors are jumping in as the market starts acting like a trampoline has many people worried. Regulators, media outlets and professional investors have expressed concerns that retail punters will get their faces ripped off.

But are they right to be worried? For my part, I think fears are overblown. Below are some reasons why.

Reason 1. Stocks only go up

Wall St Bets, the Reddit forum that’s a guilty pleasure for many finance pros, is fond of saying “stocks only go up”. Dave Portnoy, the Twitter day trader that the business media has turned into a celebrity, says the same thing.

Australian shares over the long term

A lot of people think that only a complete moron would say “stocks only go up”. After all, globally, most stocks underperform government bonds over their lifetimes, as Hendrik Bessembinder, a professor of finance at Arizona State University, has shown. Stock markets also suffer extended drawdowns. And some stock markets – like Japan’s – go down and never recover.

But, from where I sit at least, the view that “stocks only go up” in rich countries is pretty mainstream.

Hendrik Bessembinder: the most common stock does -100%. 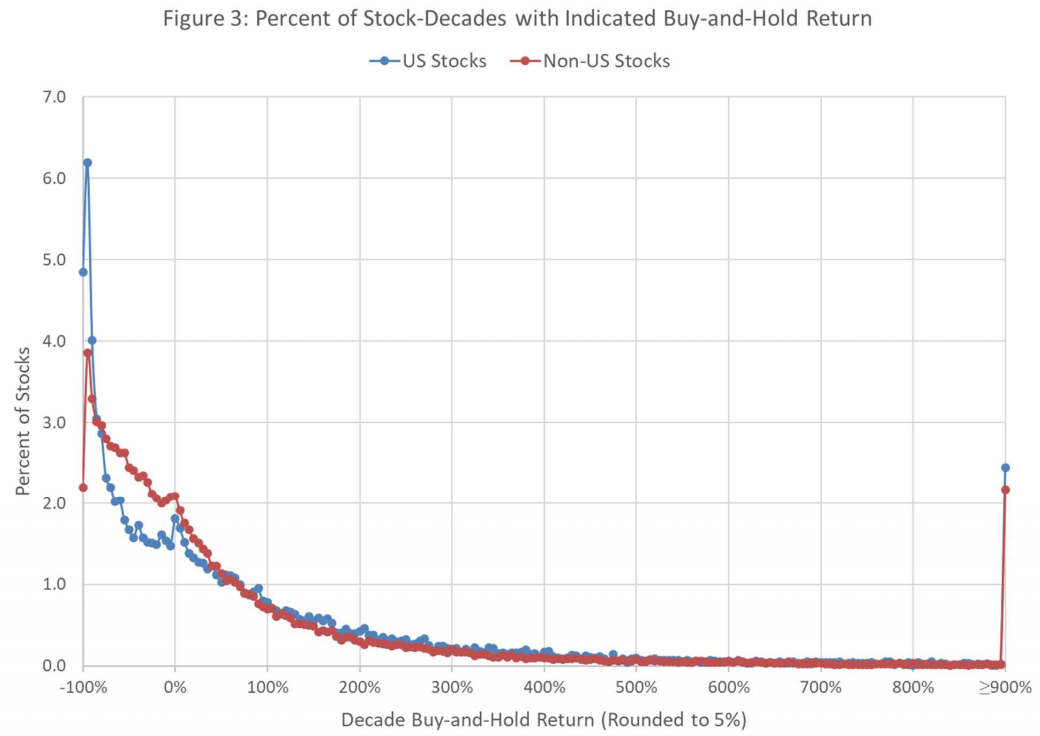 Consider this: Many of the world’s most high profile investors – the late Jack Bogle, Warren Buffett, Charlie Ellis – advocate buying and holding an index fund. In the words of Bogle: “owning a diversified portfolio of stocks and holding it for the long term is a winner’s game.”

Why? Because stocks have historically only gone up. Sure, there have been twists and turns. But long-term, the direction has been one way: up. They then contend that history will continue, and that the present will resemble the past. “If you hold the stock market, you will grow with America,” Bogle added.

In a roundabout and more empirical way, these figures – Buffett, Bogle, etc – are arguing the same thing as the Wall St Bets crowd. Namely, that stocks, on a long enough time horizon, only go up.

And it makes sense that index fund advocates should believe this. After all, if you think stocks are likely to go anywhere else (i.e. down or sideways) there is no good reason to own them long-term.

Reason 2. They are buying sensibly – VAS and VGS are popular

A lot of discussions have focused on the fact investors are buying in after the market has tanked. It is also focussed on retail investors proclivity to buy rubbish like airlines and travel companies.

But there has been little – if any – serious discussion of *why* they might be doing this. More annoyingly, several commentators have just looked at what’s going on the US with Robinhood then simply assumed the same is true here in Australia.

What CommSec users are buying

Looking through the CommSec and ShareSight data, which publish what their retail users are buying, there is a kind logic behind most retail trading: they’re mostly making recovery bets on the Australian share market.

Going through the ShareSight data it was interesting to see that the Vanguard Australian Shares ETF (VAS) has been the third most heavily purchased security among its users in June. VGS, Vanguard’s global shares ETF, also came in the top 20. This meshes with our own observations at ETF Stream that many retail investors who had been sitting on cash took the dip in March-April-May as a chance to buy.

What SharesSight users are buying

Flight Centre and Qantas were also very popular. Perhaps because some like the dividend yields. While perhaps others like the idea of front running a recovery. W

NABtrade do not publish their data. But their representatives have said on Ausbiz TV that their users under the age of 25-years old have purchased more big four bank shares and ASX 200 ETFs than everything else put together. This hardly sounds to me like dangerous speculation.

Reason 3. In aggregate the gains of trading are doomed, for pros and punters alike

The finance professor Kenneth French once said that “in aggregate, the gains of trading are doomed”. He said this because for any trade to occur, you need two traders to take equal and opposite positions. For someone to buy a share for $100, someone has to be willing to sell them it for $100. This implies that any trading gains require equal and offsetting losses. And implies that trading is, in aggregate, a zero-sum game.

ASIC: Retail punters better off in leveraged ETFs than CFDs

This is of direct relevance for retail investors of course, because trading is a loser’s game regardless of who is undertaking it. Professionals have a lot of pseudo-science to dress their trading ideas up in but at the end of the day, they’re just playing the losers’ game too.