I am seeing growing chatter on Twitter (TWTR) surrounding day trading and scalping. It’s always been there along with the plenty of trashy newsletter offerings and bogus trading services, but between entertaining personalities, zero commission trading, and a rise in unemployment, it seems

Good or bad day traders, it doesn’t bother me. This isn’t a blackjack table where one poor player could screw it up for the rest of the table by taking an ill-advised hit when the dealer is showing a six. It’s not a zero-sum game. Heck, the more, the merrier.

While I covered this topic recently, I want to toss a little more gasoline on the fire, I mean, include some things for folks moving into this venture to consider.

If you don’t know already, there will be some heavy psychological requirements. Learn to love paper cuts, don’t stalk your ex-girlfriend or boyfriend, and too much of a good thing will kill you.

Losses, often quick losses, will become your best friend. Those painful little paper cuts could be your path to glory. If you are scalping have a quick memory, but never forget. This means you should always remember how the trade played out from entry to existence to exit, but STOP WATCHING once you exit the trade. Get caught stalking your ex-position and you’ll be filled with emotional regret. It’s a transactional relationship, nothing more. Also, trying to watch everything will kill you. Twitter could become your worst enemy. There’s always an opportunity to be found if you listen to everyone on Twitter. You can’t pursue every single one of those. Stop.

Rather than preach though, I’m going to walk through an example of how day trading might work for an individual. And I’m going to suggest something that might sound crazy. Pick ONE index to start. One. If you prefer to trade the leveraged components, then technically you can have two, but it will be based on the same core.

For this example, I picked the S&P Oil and Gas Exploration and Production ETF (XOP) . Why an index or sector ETF? Because you are pretty much guaranteed movement day in and day out without the risk of a single-stock destroying you. In fact, I’d posit only you can destroy you.

So, we start with a subpar system. In this case, we’re going long on bullish crossover in the Full Stochastics indicator and short on bearish crossovers using a five-minute chart and having the position begin on the opening print after the trigger. This is about as basic as it comes, especially since the exit of one position is the entrance of the next. Rather than go through a hundred charts, we’ll take a quick peak at two: one from yesterday and a random day I picked out of a hat. 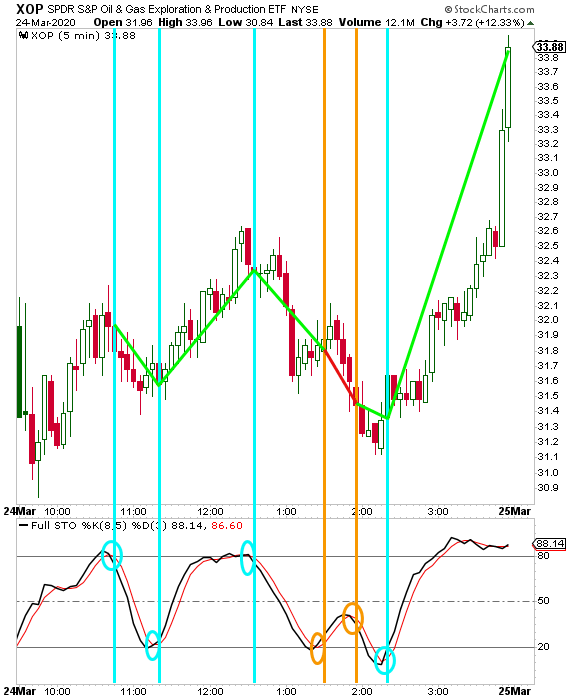 Potential for six trades marked by circles at the bottom. If we draw a line from open to close (green for a profit, red for a loss), we would see buying the bullish crossover (black moving above red) and shorting the bearish crossover (black crossing under red) produced when five profits against one loss could have been had. The final trade clocked in close to 8%. Overall, it would have been a strong day, but the challenge becomes folded into execution and emotion.

No trader will generally time the exact entry. Even an automated system will have minor skews from the theoretical results. Also, did you catch that XOP rose 12.33% on this day? I did the lines before I even checked. Even if you caught every move perfectly, you would have only turned in a day roughly equal to the day’s move if you simply owned it. Can you ignore that? Or if you only netted 8%? You probably won’t know until you experience it, but if you aren’t prepared, you will get very frustrated. 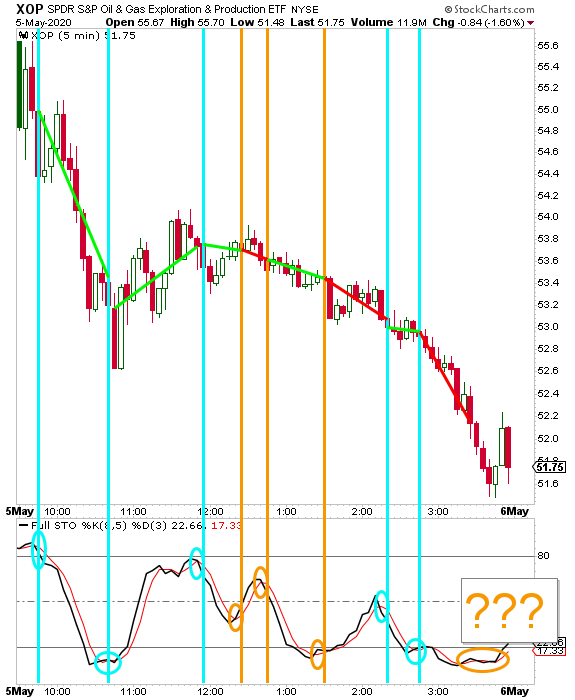 If you weren’t too busy making margaritas for breakfast, you may have gotten started short early on XOP. An hour later, you covered and went long. Another hour late short. Then things got choppy. After two strong trades, it went loss, win, loss, tiny win, and waterfall loss into the end of the day. The net should have been slightly positive despite XOP being down 1.6%, and scalping likely outperformed with a better stop structure in play, but remember we’re checking out a subpar system.

But that end of the day can wear on you. After three straight greens, the rest of the day chipped away at those early gains. Paper cuts. You might need to take them to catch an end of the day big winner rather than the big loser from yesterday.

Still, if that concerns you, then I would argue you should only trade the first 90 to 120 minutes of the day. Then, read, research, take a long lunch, do something. Come back for the final 90 minutes. In the early going, maybe skip that as well, but I’ve found the middle of the day to be sloppy chop.

After working with your hopefully better than subpar system for a bit, you’ll learn if the middle of the day is opportunity or frustration. It may be that you stick around if nothing triggers early. It may be you stick around all day. Or maybe you get some time for your brain to rest. You won’t have to wait long. Your mind and body will tell you after the first month or so.

I hope this gives you something to build from if you want to make day trading part of what you do. My email is open if you have questions, and best of luck!